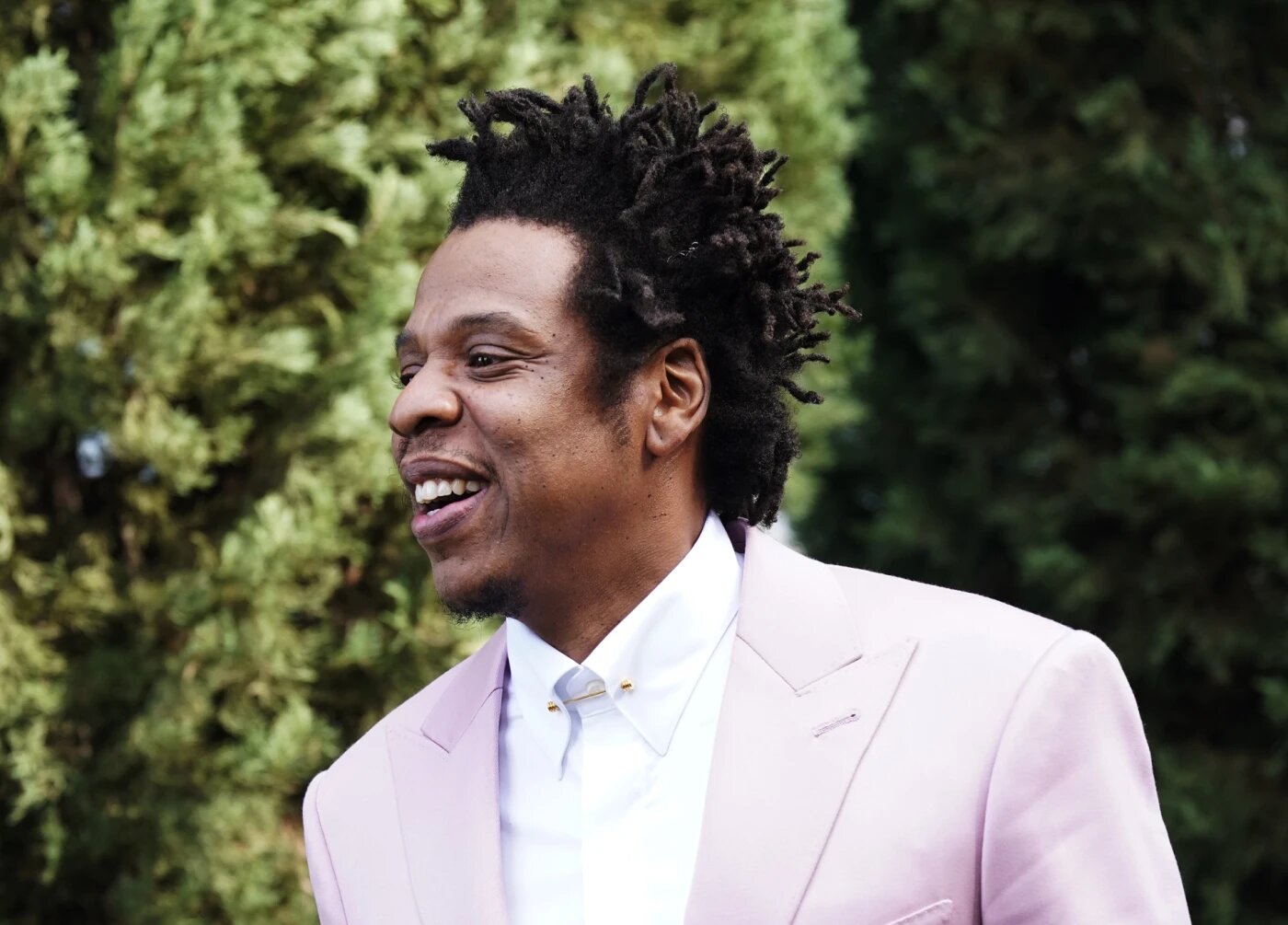 From the projects to the throne, New York rapper, producer, and entrepreneur Jay-Z embodied the quintessential rags-to-riches dream, becoming one of the most successful MCs of his generation while creating an empire that made him one of the richest artists of the era. After debuting in the late ’90s with Reasonable Doubt and In My Lifetime, Vol 1, he began a chart run that notched over a dozen number one albums spread over two decades, including the multi-platinum, Grammy-winning Vol. 2…Hard Knock Life (1999), the Blueprint series (’01, ’02, ’09), and The Black Album (2003).

Born in 1969 and raised in the rough Marcy Projects of Brooklyn, New York, Jay-Z was raised by his mother and turned to the streets, where he made a name for himself as a fledging rapper and drug dealer. Known as “Jazzy” in his neighborhood, he soon shortened his nickname to Jay-Z and did all he could to break into the rap game. As he vividly discusses in his lyrics, Jay-Z also became a street hustler around this time, doing what needed to be done to make money. For a while, he ran around with rapper Jaz-O, aka Big Jaz. From Jaz he learned how to navigate the rap industry and what moves to make.

He also participated in the group Original Flavor for a short time. Jay-Z subsequently decided to make an untraditional decision and start his own label rather than sign with an established one as Jaz had done. Together with friends Damon Dash and Kareem “Biggs” Burke, he created Roc-a-Fella Records. Once he found a reputable distributor, Priority Records (and later Def Jam), Jay-Z finally had everything in place, including a debut album, Reasonable Doubt (1996).

Though Reasonable Doubt reached only number 23 on the Billboard 200 chart, Jay-Z’s debut eventually became recognized as an undisputed classic among fans, many of whom consider it his crowning achievement. Led by the hit single “Ain’t No Nigga,” a duet featuring Foxy Brown, Reasonable Doubt slowly spread through New York; some listeners were drawn in because of big names like DJ Premier and the Notorious B.I.G., others by the gangsta motifs very much in style at the time, still others by Jay-Z himself. By the end of its steady run, Reasonable Doubt generated three more charting singles — “Can’t Knock the Hustle,” “Dead Presidents,” and “Feelin’ It” — and set the stage for the follow-up, In My Lifetime, Vol. 1 (1997).

Peaking at number three on the Billboard 200, In My Lifetime sold much more strongly than its predecessor. The album boasted pop-crossover producers such as Puff Daddy and Teddy Riley, and singles such as “Sunshine” and “The City Is Mine” indeed showcased a newfound embrace of pop crossover.

Yet there were still plenty of hard-hitting songs, such as “Streets Is Watching” and “Rap Game/Crack Game” to lace In My Lifetime with gangsta rap as well as pop crossover. Jay-Z’s next album, Vol. 2: Hard Knock Life (1998), released a year after In My Lifetime, was laden with hit singles: “Can I Get A…” and “Hard Knock Life (Ghetto Anthem)” broke the Top 20 of the Billboard Hot 100, while “Cash, Money, Hoes” and “Nigga What, Nigga Who” also charted. Vol. 2: Hard Knock Life ended up winning a Grammy for Best Rap Album.

Vol. 3… Life and Times of Shawn Carter
Like clockwork, Jay-Z returned a year later with another album, Vol. 3: Life and Times of S. Carter (1999), which topped the Billboard 200 and spawned two hits: “Big Pimpin'” and “Do It Again (Put Ya Hands Up).” The album was Jay-Z’s most collaborative to date, featuring ten guest vocalists and a roll call of in-demand producers such as Dr. Dre and Timbaland. Jay-Z then scaled back a bit for Dynasty Roc la Familia (2000), his fifth album in as many years. The album showcased Roc-a-Fella’s in-house rappers, such as Beanie Sigel, Memphis Bleek, and Freeway. On Dynasty Roc la Familia, Jay-Z also began working with a few new producers: the Neptunes, Kanye West, and Just Blaze. The Neptunes-produced “I Just Wanna Love U (Give It 2 Me)” became a particularly huge hit single this go-round.

Jay-Z’s next album, The Blueprint (2001), solidified his position atop the New York rap scene. Prior to its release, the rapper had caused a stir in New York following his headlining performance at Hot 97’s Summer Jam 2001, where he debuted the song “Takeover.” The song features a harsh verse ridiculing Prodigy of Mobb Deep, and Jay-Z accentuated his verbal assault by showcasing gigantic photos of an adolescent Prodigy in a dance outfit. The version of “Takeover” that later appeared on The Blueprint includes a third verse, this one dissing Nas, who, in response to the Summer Jam performance, had called out Jay-Z, “the fake king of New York,” in a freestyle known as “Stillmatic.” As expected, “Takeover” ignited a sparring match with Nas, who responded with “Ether.” Jay-Z accordingly returned with a comeback, “Super Ugly,” where he rapped over the beats to Nas’ “Get Ur Self A…” on the first verse and Dr. Dre’s “Bad Intentions” on the second. The back-and-forth bout created massive publicity for both Jay-Z and Nas. In addition to “Takeover,” The Blueprint also featured “Izzo (H.O.V.A.),” one of the year’s biggest hit songs, and the album topped many year-end best-of charts.

Unplugged
Jay-Z capitalized on the runaway success of The Blueprint with a number of follow-up projects. He collaborated with the Roots for the Unplugged album (2001) and with R. Kelly for Best of Both Worlds (2002). He then went on to record, over the course of the year, 40 or so new tracks, 25 of which appeared on his next record, the double album The Blueprint²: The Gift & the Curse (2002). Though billed as a sequel, The Blueprint² was considerably different from its predecessor. Whereas the first volume had been personal, considered, and focused, the second instead offered an unapologetically sprawling double-disc extravaganza showcasing remarkable scope. As usual, it spawned a stream of singles, led by his 2Pac cover “’03 Bonnie & Clyde,” featuring his future wife Beyoncé. Furthermore, Jay-Z guested on a pair of summer 2003 hits: Beyoncé’s chart-topping “Crazy in Love” and Pharrell Williams’ Top Five hit “Frontin’.”

The Grey Album
It was then that Jay-Z announced his imminent retirement after the release of one more album. That LP, The Black Album (2003), was rush-released by Def Jam and soared to the top Billboard spot at the end of the year. It spawned a couple big hits — “Dirt Off Your Shoulder” and “99 Problems” — and inspired a popular mash-up bootleg, The Grey Album, by Danger Mouse. The subsequent year (2004) was a whirlwind for the retiring Jay-Z. He embarked on a farewell tour that was topped off by an extravagant Madison Square Garden performance documented on the Fade to Black DVD, and he also embarked on an arena tour with the embattled R. Kelly.

With his reputation bigger than ever, Jay-Z accepted an offer to assume the role of president at Def Jam. The seminal rap label was struggling and needed someone to guide it through a rocky transitional phase. Jay-Z accepted the challenge and took over the company begun by Russell Simmons and Rick Rubin roughly 20 years earlier. (As part of its deal with Jay-Z, Def Jam’s parent company, Universal, bought Roc-a-Fella.) Considerable fanfare met the presidential inauguration, as Jay-Z became one of the few African-American major-label executives in the business. Numerous rappers owned or operated their own boutique labels, but none had ever risen to such major-label heights. The rapper-turned-president didn’t take his job lightly, either, at least judging by his initial year at the helm. Within months of assuming his position, he fostered a string of newfound talents, including Young Jeezy and Rihanna.

Kingdom Come
In 2005, Jay-Z came out of retirement for the I Declare War concert in New York City. The ambitious show featured a parade of high-profile guest stars, including Diddy and Kanye West, and in a peacemaking move, Nas. With this longstanding beef squashed, Jay-Z announced he was coming out of retirement for good. He made it official when Kingdom Come (2006) hit shelves. Jay-Z kept firing with American Gangster (2007), inspired by the concurrent film of the same name. After he left Def Jam and established Roc Nation — a label, music publisher, and talent agency through Live Nation — he released a third installment in the Blueprint series, The Blueprint 3 (2009). Announced with the single “D.O.A. (Death of Auto-Tune),” the album featured productions from Kanye West and Timbaland, plus guest features for West, Rihanna, and Alicia Keys, the latter of whom appeared on “Empire State of Mind,” one of the biggest hits of Jay-Z’s career. At various points during the next two years, Jay-Z and West, joined by numerous associates, worked on Watch the Throne (2011). The album debuted at number one on the Billboard 200, supported by the smash hits “Otis” and “Niggas in Paris.”

During the next few years, Jay-Z was involved primarily with assorted business and philanthropic ventures, as well as the production of the documentary Time: The Kalief Browder Story. He appeared on a handful of tracks headlined by other artists, including Drake’s “Pop Style” and DJ Khaled’s “I Got the Keys.” Further collaborations, such as his and Beyoncé’s appearances on Khaled’s “Shining,” along with an induction into the Songwriters Hall of Fame (as the first rap artist), and the addition of newborn twins to the Carter family, all preceded the album 4:44 (2017). His 13th full-length, the critically acclaimed, platinum-certified set debuted atop the Billboard 200 and was nominated for Album of the Year and Song of the Year (for single “The Story of O.J.”) at the 60th Annual Grammy Awards in 2018. Later that year, he embarked on an international stadium tour with Beyonce dubbed On the Run II. To coincide with the trek, the pair released the surprise album Everything Is Love as the Carters. Including the Migos-assisted lead single “Apeshit” — which was promoted with a music video shot at the Louvre — Everything Is Love debuted at number two and featured production by Pharrell Williams, Mike Dean, Cool & Dre, Boi-1da, and more.