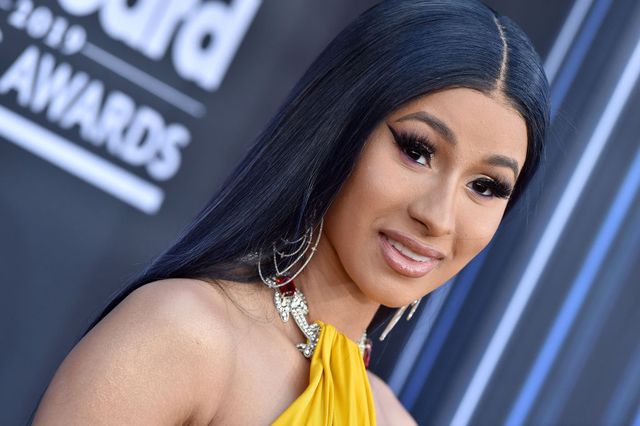 Rapper and entertainer Cardi B made her debut in the late 2010s with a quick ascent to the top of the rap and pop charts. After an initial run of singles that crowned her the first female rapper in nearly two decades to top the Billboard Hot 100 with the hit “Bodak Yellow,” she issued her Grammy-nominated, critically acclaimed debut album, 2018’s Invasion of Privacy, which reached number one and broke additional records with the summer smash “I Like It.” Capping off her whirlwind breakthrough era, she became the first solo female rapper to win a Grammy for Best Rap Album.

That same year, Cardi B signed with Atlantic Records and scored a hit with the single “Bodak Yellow,” which climbed to the top spot of the Billboard Hot 100 in late September; it made her the first solo female rapper to do so since 1998.

Her chart run continued with features on G-Eazy’s “No Limit” and Migos’ “MotorSport,” two additional Top Ten hits that crowned Cardi as the first female rapper to have her first three entries land in the Top Ten of the Hot 100 and Hot R&B/Hip-Hop Songs charts. After the release of her single “Bartier Cardi” with 21 Savage, Cardi hopped onto a remix of Bruno Mars’ “Finesse.” The new jack swing revival track soared to number three in the U.S. and topped charts across the globe. With these singles, Cardi became the first woman in history to have five simultaneous Top Ten singles on the R&B/Hip-Hop Songs chart.

Her official debut studio album, Invasion of Privacy, arrived in spring 2018. Including her two breakthrough singles, the effort also featured appearances by Migos (“Drip”), Chance the Rapper (“Best Life”), Kehlani (“Ring”), SZA (“I Do”), YG (“She Bad”), and Bad Bunny and J. Balvin on “I Like It.” The latter track was issued as a single and made a steady climb to the top of the Hot 100 in July 2018, making Cardi the first female rapper to achieve two number ones.

That summer, she was also featured on hit singles with Jennifer Lopez (“Dinero”) and Maroon 5 (“Girls Like You”). To cap her banner year, she was nominated for multiple Grammy Awards and Invasion of Privacy was included on numerous year-end critics’ lists. The album went on to win a Grammy for Best Rap Album, making Cardi the first solo female rapper to achieve the honor.

The next year, she was nominated again in the category of Best Rap Performance for her Offset collaboration “Clout.” In August 2020, she topped the Billboard Hot 100 singles chart with the song “WAP,” a collaboration with Megan Thee Stallion.